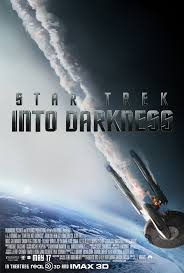 I went in to see Star Trek: Into Darkness literally forty five minutes after watching Star Trek for the first time in years. I’ve mentioned before that I’m not a huge Star Trek fan. I’ve seen a few episodes of the original series here and there, and I’ve seen the original Star Trek movie as well as Star Trek 2: The Wrath of Khan. Generally, when I watch Star Trek,  I feel like I’ve been lectured at about race relations and I can’t take it seriously because I had to watch some beautiful woman try her hardest to pretend that she was actually attracted to William Shatner.

Largely, I usually feel like I wasted my time and not in the good way, like, “I wasted two hours having a lot of fun and it was awesome,” but more like, “Huh, well, that was two hours that I could have been sleeping or DOING JUST ABOUT ANYTHING BUT WATCHING STAR TREK.” Even with this attitude, I really liked Star Trek (2009). I watched it again this morning and still really liked it. I was even pleasantly surprised, because I forgot the Chris Hemsworth plays George Kirk and getting to see Chris Hemsworth do anything, even for just a few minutes makes the world brighter…

The new Star Trek universe has two things really going for it:

1. A clean slate, I’m pretty DC’s whole “New 52” initiative came from this same idea that J.J. Abram’s decision to take the characters and situations that people love, blow up their past adventures and move on, with all new ones. DC screwed it up, and from a lot people’s perspectives, it seems Abrams did too. I’m not so sure. I thought that Star Trek was a gamble, and I’m thinking that Into Darkness is just continuing the game. We’re still waiting for the payoff.

2. It’s cast. The flaws of these movies are huge. They’re far from perfect. They have large gaping plot holes, an inability to let go of the past, and overly manic directing style. But the shiny new Star Trek cast is wonderful. Chris Pine is wonderful. Zoe Saldana is amazing. Karl Urban is fantastic. John Cho and Anton Yelchin are great. Simon Pegg is one of the greatest gifts ever given to cinema. If I were to try to explain Zachary Quinto in one word, it would be “Wow!” I love this cast individually, and they’re just wonderful together.

Added to the mix this time around was Benedict Cumberpatch at Khan. I love me some BBC stars, even though I don’t understand the fanatical devotion to Sherlock, and I think he’s a very good actor. I was excited to see him take on this iconic villain.

Into Darkness had all of the elements of a great movie, but it didn’t quite land, stranding it as merely good. We open with a traditional Star Trek scene, Kirk and McCoy are running through a jungle trying to keep from violating The Prime Directive. (Which is then laid out by Spock for Trek newbies. I did know what The Prime Directive was, I’m not that clueless.) Of course, this is Chris Pine’s trigger happy version of Captain Kirk, and violate the directive he does, flamboyantly and spectacularly so. Spock reports him, which kind of ticks him off, since during the mission Kirk saved the Vulcan’s life.

Kirk is then busted down from Captain to Commander, and The Enterprise’s command is handed back to Admiral Christopher Pike. Bruce Greenwood’s performance as Pike is also great, as it was in the first movie. He once again pulls Kirk back from the edge in a bar. Spock is transferred to a different ship.

Meanwhile, in London, Sherlock Holmes tells Mickey Smith that he can heal his daughter…sorry, that was my CSD acting up. But the Starfleet analyst that “John Harrison” (Khan) is blackmailing was played by Noel Clark, who played poor put upon Mickey Smith back in the early days of the Doctor Who reboot. I always loved and pitied poor Mickey, who was left behind over and over again. Anyway,  in exchange, the analyst blows up a Starfleet archive which puts the Federation into emergency mode, which begins with a meeting of Starship captains and first officers. I bet you can guess how that ends.

They get blown up. Pike dies. Kirk and Spock are sad. Kirk becomes Captain again. All is as it should be. Except, Kirk requests to be sent after Harrison, (who, need I remind you is not actually that guy, but Khan.) and Old Guy Who Is Clearly Not To Be Trusted (Admiral Marcus), says, “yeah, go for that, and take these new experimental torpedoes to kill him with.” Kirk, being Shiny New Trigger Happy Kirk, who’s mentor just got blown up, is all, “Okey Dokey.” When Spock and Scotty point out that this smells fishy, he just gets indignant and Scotty quits. Luckily, Uhura and Spock (who are a couple in this universe don’t forget) are currently in the middle of a lover’s spat, so she sides with Kirk, basically out of spite and maybe a little bit out of residual sexual tension between Saldana and Pine.

They capture Harrison (KHAN!) and put him in a nice clear prison cell just like Nick Fury did to Loki in The Avengers. Then Khan, Kirk and Spock chat for a while and we find out that he’s Khan. (Duh) There are a few more plot twists involving the introduction of Carol Marcus, who Kirk clearly wishes to bone. (He later “welcomes her to the family” and it’s severely creepy) And they wind up finding out that Admiral Marcus is a bad dude, they get Scotty back, and he Kirk and Khan raid Marcus’s ship. Spock calls New Vulcan to talk to Spock Prime about Khan. Prime says he vowed to not interfere with the new timeline, and that Spock Two has to make his own mistakes. But of course, he then tells them not to trust Khan, he is very dangerous. When Two asks Prime how they defeated Khan, Prime’s response is that it was with a great cost. That cost, of course, was Spock Prime’s life.

While I was psyched to see Leonard Nimoy (I mean, really, why wouldn’t anyone be? The man is great!) this was to me a major instance of the movie being too self aware. Like I said, one of the great things that this series has going for it is a clean slate. Having Spock Prime in the first movie was a respectful nod to fans, and helped establish a new clean time line. But if they’re going to haul him out for subsequent adventures, just to give advice to Spock Two it cheapens the idea.

They beat Khan and this time it is Kirk that pays with his life, not Spock. I liked this twist, because it unleashed Spock’s full on wrath. Zachary Quinto does angry, very very well. Also, seeing him do the full on long scream, “KHAAAAAAAANNNNNN!” was way more fulfilling than anything Pine could have done. This is not a criticism of Chris Pine, who is really great at playing Captain Kirk, I just feel like Quinto is better at everything than most people.

Thankfully, due to a MGuffin of Khan’s blood having regenerative properties, (discovered by McCoy when he injects it into a dead tribble…another cute but unnecessary Trekkie nod.) we will be spared Star Trek III: The Search for Kirk, because they just revive the dead Captain. It’s a nice scene when he and Spock make up, and we flash forward to a year later, and The Enterprise crew gets their 5 year long commission to go “where no one has gone before.” (I hate changing gender pronouns for no reason, by the way. It’s pandering and insulting.)

Overall, I enjoyed the movie. Like I said, I love this cast. I think they’re great. Urban took a bit of a back seat this time around to give Pegg the shining number 3 spot. (1 and 2 belong to Pine and Quinto, as it should be). He delivers possibly the greatest line ever, “Well, if it isn’t Captain James T. McPerfect Hair!” Saldana  steals a couple of great scenes and seeing her speak Klingon was a lot of fun. Cho and Yelchin are both so perfectly suited to playing Sulu and Chekov respectively I have trouble even analyzing what they do, and just sit back and enjoy watching them. Cumberpatch was good, if not great in his quiet intensity.

Visually the movie is a huge improvement on it’s predecessor. The lens flares are still there but much more muted, Kronos, the Klingon homeworld is a rotting bit of beauty and The Enterprise herself looks great.

Like I said, the elements were all there, the movie just didn’t gel. And it’s way too long. I don’t care how good it is, almost two and half hours of people flying around in a spaceship is too long. But I give it like a 7/10.

My God is the Anchorman 2 teaser brilliant. It’s so brilliant.

Elysium will probably be the best movie of the past five years and no one will talk about it after the first few months. Just like District 9.

I don’t know why I didn’t realize that Kevin Costner was playing Jonathan Kent in Man of Steel, but that makes me way too happy. I hope there’s a scene where he and Clark play catch. Anyway, the new trailer was so good I actually found myself crying. I’m yoyoing so hard on my expectations for this movie that I’m going to get whiplash, but right now I am firmly in the “excited” place.

Despicable Me 2 will be the best movie of the summer and again, no one will talk about it. It will be unfortunately overlooked because it’s “a family movie.” This makes me sad.

So far these are my summer movie season standings:

1. The Great Gatsby (with a bullet)

Next week we get Now You See It and After Earth. I haven’t decided which I want to see first. I really want to see Now You See It, but I’m also really excited that Will Smith is teaching his son how to fight aliens…

One thought on “Keep on Trekking…”