So, Arrested Development is back on Netflix. This is exciting for many reasons, not the least of which is getting to see Alia Shawkat in stuff again. (Loved her since State of Grace )

But this seems as good a time as any to get in to one of my weirder obsessions, which I’ve hinted at occasionally in the past. 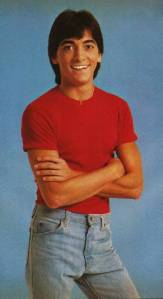 Sometimes the early teen heart just wants what it wants

Now, if you are unfamiliar with Mr. Baio’s work, I’d like to know what in the hell you did with your childhood, because you were clearly not watching Happy Days reruns and that makes me sad for you.

Anyway, on Happy Days, he played Chachi, who was the young and slightly less smooth cousin of Fonzie.

If you don’t know who Fonzie is you should probably just jump off of a bridge.

Anyway, I loved him. Not in a, “this is an amusing character way,” I actually loved him. In a creepy fangirl download pictures and have bizarre fantasies about him way. This lasted until I was about fourteen. Of course by then Charles in Charge had moved to Nick at Nite, and it was hard to escape. It was a fun little joke for a while, and everyone in my life sort of let it go.

Katie still brings it up from time to time, but only because we bonded over it when we first met. (Her thing was for Ron Howard…)

But regardless it was one of those “there’s a little truth to every just kidding” situations. I did, and still kind of do, find the young Scott Baio very attractive. Despite the hair…or possibly because of it. Whatever.

Then when I was in college along came Arrested Development…I mean, it was already off the air for a few years when I watched it, but I loved the whole “Bob Loblaw” bit. Baio was playing the Bluth family’s new lawyer, an ambulance chaser named Bob Loblaw, replacing their old lawyer, Barry Zuckercorn, played by Henry Winkler.

If you don’t know who Henry Winkler is, please go climb back under your rock now, and watch some Happy Days reruns. Seriously.

This is him. He’s the Fonz.

I also loved the line to clearly remind people of who they were, “This is not the first time I’ve replaced Barry Zuckercorn. I can do everything he can do, and skew younger. With juries and such.”

Either way, how exciting was it when in Episode 4 of the new Netflix season when Bob Loblaw was defending Barry Zuckercorn, and Barry actually shouted “Chachi!” at one point?

No? That was just me who was excited about that, then.