It’s kind of hard to believe that eight years ago I wrote this:

It’s even harder to believe that eight years ago a show that was barely based on a comic book character, took great pains to be deeply grounded and playing by the rules of more conventional genre TV tropes, ended with a co lead getting a Green Lantern ring, after the funeral of it’s main character which was attended by several time travelers, including his own daughter, and two other superheroes.

Arrow birthed a universe, and it wasn’t always worthy of the shows that came after it, but it was always, always itself and partly that’s because it had a beating heart in Oliver Queen, and particularly Stephen Ammell as Oliver Queen.

The final episode of Arrow does a lot of things that I love, Felicity has a brief chat with her grown up daughter, and with Barry Allen and Kara Danvers. In his final act of rebuilding the world, Oliver brought back Moira, Tommy and Quentin. Tommy connects with Not-Laurel. The Al-Ghul sisters also showed up to the funeral and Sara and Nyssa got their reunion moment of closure. (I now fear for Ava.) Dinah is headed to the future to fight evil with Not-Laurel and Mia, Thea and Roy (YAY ROY!) got back together, Rene is elected mayor, and oh, right….

It’s not until the final moment that I got what I’ve spent maybe six seasons saying I wanted. (It’s not just me, it’s a lot of the fandom) Digg got a Green Lantern ring. Looks like our John is headed to HBO Max. And if he isn’t WE WILL HAVE WORDS Mr. Guggenheim. He also did the Salmon Ladder. The finale was very good for John Diggle.

I watched the pilot right after, which was fun, mostly because, BABIES! But also because I wanted to remember that I was kind of all in on this show from minute one, and watching it now, with everything that it’s built, the pilot is even more exciting and interesting.

Anyway, tonight we get the final episode of The Good Place, which means I’ll cry a whole lot and write about it.

This week was very heavy on the Doomed stuff. It spread over 3 books this week. I think we’re nearing the end. Does anyone know? Ugh. Anyway, a little bit more steady than last week, but I really am starting to have a clear idea of what I like and don’t like as this summer of experimental comic buying is starting to draw to a close.

This is not  an activity that appears to be going anywhere.

Also, who else can barely contain themselves at the thought of Multiversity?

This was an exceptionally good week for books. I managed to pick up a bunch of my favorites, a couple of characters who’ve been getting on my nerves have redeemed themselves.

Ollie and Diggle confront Dragon and Emiko and Naomi takes on his goons who she almost kills with her bare hands. She’s a character who’s really starting to grow on me. This was a pretty satisfactory conclusion to this arc, especially with Oliver taking Emiko on as his apprentice. (She refuses to be called a side-kick.) My guess is she’ll be a Titan before long. I’m really looking forward to reading everyone’s Future’s End, issues. Oh, and hey, speaking of Future’s End.

Barda and Emiko fight Deathstroke and Fifty Sue and they lose spectacularly, until Emiko shoots Fifty Sue with a fire arrow. Plastique convinces the others that they need to work with Terry, after he batarangs them. Tim got Madison her necklace back! Yay! They’re starting to grow on me. She’s not Harper, but I like her. Meanwhile, on OMAC island, turns out one of those scientists is Earth-2 Lana Lang, and Fifty Sue threatens her. Also Grifter is starting to be unsure. Then Lois stares at her clues and sees all kinds of things and becomes Red Tornado. It was kind of weird. I have to admit, and felt a lot like the truth bomb.

Cyborg Superman fought Superdoom in space for a while. Meanwhile, on The Watchtower, The Justice League makes some decisions. Clark and Doomsday argue in his head for a little while until Hawkman shows up, fighting some Brainiac robots that look mysteriously like those cyborgs in Future’s End. Lana and Steel are in space for a while, and he saves her life and I love these two together. Then Superdoom and Wonder Woman fight and it’s so great. She’s willing to completely kick his ass if that’s what it takes. Then Clark wins the head fight, but now they have to fight Brainiac.

Action Comics Annual #3: “My Body Is A Cage”

Lois is starting to fight back against Brainiac as Clark fights Doomsday and there’s this whole parallel narrative going on and it’s pretty cool. Batman and Lex Luthor, meanwhile, with a bunch of criminals from the Phantom Zone, realize they need to get all of that Kryptonite out of the atmosphere. Also, Jason, Kori and Roy are fighting robots in Gotham, when Superdoom shows up. Anyway, there’s lots of fighting and now Lois has telepathic powers and Lois and Clark were all hugging each other and it was super great.

Brainiac is attacking everyone’s minds with some kind of space laser which, of course we see through Jason, Kori and Roy. Can I say, I kind of love that they’re in this story? Anyway, Superman comes back, he and Diana make out, Lois looks kind of uncomfortable with it, and it turns out that Mongul is behind the whole thing. We’ll see what happens next!

Grayson got me right in the feels this week, but I don’t think that’s terribly surprising. We open with Helena teaching a much of the St. Hadrian girls to shoot crossbows, which is really fun. Then Hood shows up, and he’s all buzzy and weird and it turns out he had some kind of implant. Dick talks to Bruce, and they have adorable code names for each other, “Mr. Malone” and “Birdwatch,” and Bruce asks if he’s safe. Dick asks how Alfred and Barbara are dealing with his death, and Bruce kind of grunts at him, because, Bruce, and feelings. Then Dick teases Helena about almost kissing him and she sort of grunts at him. The Midnighter appears to be working with a weird organization as well. Dick and Helena get a new mandate from Minos, and head out. They flirt some more, and then he tracks down an assets and fires his gun and it’s very upsetting for everyone. He’s not Jason. No guns. Then he talks about Doctor Who, and my brain breaks for a while. He and Helena argue about what to do with this girl, she takes him it, and he wants he to go to jail on account of her murdering people and eating them. Then he talks to Bruce again and it’s really sweet and I cried.

That’s this week. See you tomorrow for Marvel!

ey all! So I had some serious catch up work to do this week, because I’d accidentally forgotten last week’s Future’s End and Secret Origins. Anyway, let’s just dive in, OK? There’s a lot of stuff going on so let’s dive in. 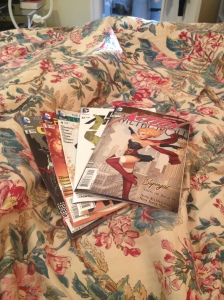 I’m going to be honest. I’ve been fully absorbed into Doomed. It’s pulled me into Superman in a way I really didn’t expect to be. And this issue was doubly exciting because it featured the Variant Cover of Supergirl in a Pinup Position and I can’t wait to frame it and hang it in the nerd corner. But also, everyone has decided to track down Superman/Doomsday, but General Lane and John Corbin shot a whole bunch of Kryptonite at him and now Superman is gone. There is only Doomsday. Meanwhile, Lana and Diana have a tense phone conversation about this and it’s pretty great.

I haven’t been keeping up with Green Arrow, but I do love me some Oliver Queen, so this was a pretty fun to read. Basically, The Dragon has kidnapped John Diggle in a desire to draw out Green Arrow as revenge for the death of his father. But it turns out it was Diggle who killed his father! Gasp. Interesting that in The New 52, Ollie defends Seattle, not Starling City. Intersting detail there, and frankly, kind of annoying. With all his Earth-boundness and political leanings, Green Arrow has always been one of the more Marvel-y of the DC heroes, but that doesn’t mean that he shouldn’t have his own fictional city anymore. Stupid New 52.

4 had Tim Drake, sorry, Cal Claremont, running through Central Park with his girlfriend, who was trying to get him to open up about his past. He was at least, somewhat honest with her, I would guess. He noted that he was from Gotham, and that he left after the war and that all of his friends and family are dead. I’m guessing that this isn’t strictly true, since we know that Bruce is still alive, but they’re clearly estranged, as when Tim sees Terry on a giant screen he mumbles, “Another one for the meat grinder.” Them’s fighting words, Drake. Meanwhile, S.H.A.D.E. and Father Time have recruited Frankenstein, who was also in Batman & Robin last week, and I don’t care much. Still just the one sight of Terry and what the hell you guys? Meanwhile, Grifter gets himself kidnapped and paralyzed because sure.

5 gave us the launch of eSphere, which I assume is what’s going to evolve into Brother Eye. Mr. Faraday, the weird, possibly evil guy who kidnapped Grifter lectures him about how he doesn’t know what’s going on and sends him Cadmus island to partner with  a little girl with laser eye powers to kill heroes or something? I’m not sure what’s going to happen there. Also, Firestorm continued to be a douche, but they broke up, and it’s sad. Also John Constantine was in a crop circle.

Still no Terry. What the stinking hell man?

Did we really need a Batman: Secret Origins? We all know his origin. Dead Parents. Epic travel training. Dark night of the soul. Bat flies through window. Didn’t everyone who’d pick this up read Year One? Anyway, that happened.

I liked the Aquaman story. I haven’t read any Aquaman, but it was kind of cool to see teenage Arthur go on his own Batman quest.

Sigh. Starfire. Look, I love Kori, but I couldn’t have been the only person who wanted more than the war princess traded into slavery, lead a riot story. Was she a Titan? Did she know Dick Grayson? What happened to make her so vacant and bimboey in the first volume of Outlaws instead of her badass competent self that she eventually got to? I’m not overly shocked that the ball was dropped again with her, but I wanted something. *Sigh*