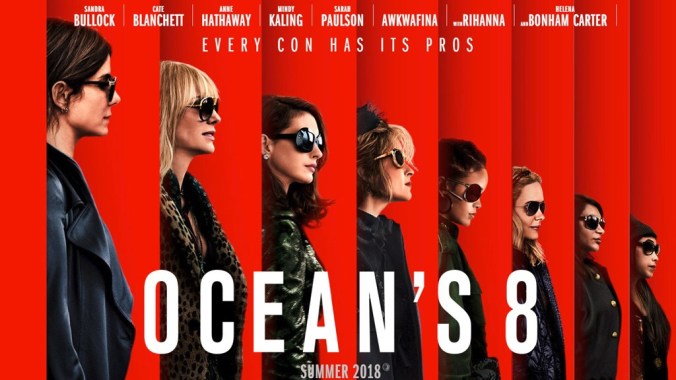 Hey all! I’m gonna do my best to get caught up on movie season in the next week! (Incredibles 2, Jurassic World: Fallen Kingdom, and Won’t You Be My Neighbor coming soon!)

There are few movies that I love the way that I love Stephen Sodeberg’s remake of Ocean’s 11. It’s such a perfect movie, slick and funny, and sexy. So I had mixed expectations walking into Ocean’s 8, which I wanted to love but that I had heard was only OK.

Anyone who thought this movie was only OK clearly does not like heist movies. It’s a delight, taking as much from The Sting as it does from it’s predicessors. The performances are all amazing, and while everyone is rightly talking about Anne Hathaway, more people should be talking about Helena Bonham Carter who is fabulous and hilarious is in this movie.

But I loved all of them, Sandra Bullock has some very fun moments (when she literally practices a speech in a mirror, a wonderful callback to Clooney and Pitt I burst out giggling.) Cate Blanchett is so sexy I almost fainted, until I saw Rhianna in that red dress (HOOOLLLLYYY CRAP!) Mindy Kaling and Awkwafina and delightful and Sarah Paulson is very good. (I liked the concept of her character, a housewife who gets her kicks from fencing stuff that “fell off a truck” more than Paulson’s performance…which again, fine.) A few key cameos from the original 11, although it’s very clear that Danny faked his death, you guys…like SUPER clear.

My July Camp NaNoWriMo project is a heist. (I’m not gonna get to into it here.) So I’m diving into this genre at the moment. (It’s such a good one, that I love so much.)

Mamma Mia: Here We Go Again: ARE CHER AND ANDY GARCIA GOING TO BONE IN THIS MOVIE? Also Cher singing “Fernando.” *DIES* Also, where’s Donna? Also, this movie is required to be seen in Dine In, and not alone, because I must be drunk and mocking it at all times.

Fantastic Beasts: The Crimes Of Grindelwald: OK, let’s make something clear…THE TRAILERS give Rowling an in to make Dumbledore’s sexuality explicit. “I cannot confront Grindelwald…he and I have a past, we were in love and I’m not strong enough.” IT’S RIGHT THERE JO! GET IT TOGETHER! Otherwise, looks super dope.

The Nutcracker: The Secret Of The Four Realms: I’m actually really stoked for this? Like in a very odd way. I kind of love that Disney has just accepted “Tim Burton and Baz Luhrman had a baby and it was a fairytale nightmare-scape” as a filmmaking aesthetic. The movies aren’t always great. (Or ever? Beauty And The Beast and Cinderella were pretty good. I know other people like Maleficent…the Alice movies are awful) But they’re cool to look at. And I like Kiera Knightly

A Simple Favor: In which Anna Kendrick continues to live out all our dreams, this time by killing Blake Lively because of her perfect life, maybe? (Also that this isn’t Leighton Meister seems like a mistake in the casting department, but I love Anna too. Get the girl back to her creepy stalker roots.)

A Star Is Born: Unless this movies completely poops the bed, and Gaga whiffs “The Man Who Got Away” (HIGHLY UNLIKELY) it’s gonna be favorite of the year, I bet.