I’ve made my thoughts on being on hand for rope drop extremely clear. I think it’s an important way to remove a lot of stress from a day in Disney park day. Of course, sometimes, life doesn’t care about your plans and ideas about theme park touring.

At the sort of last minute, this trip, Disney changed Magic Kingdom’s opening from 9 AM to 8 AM. To compensate, Juli and I got up SUPER early, and were at the turnstiles at 6:50 (YES REALLY). Magic Bands didn’t start scanning until 7:20 and Main Street didn’t open until 7:50.

Is this weird? You BETCHA. Main Street usually opens about an hour before park time, not 10 minutes. Regardless, we got a lot done. I purchased a lovely dress at the Emporium, that doubled as a ticket to a meet and greet with Ashley Eckstein and Ashley Taylor of Her Universe. My mania to do this was kind of unfounded, because unlike at Comic Con, not many people at Magic Kingdom, give a rat’s ass about Ashley. (Which is unfortunate. Because Ashley Eckstein, and now Ashley Taylor are incredible women who are doing awesome stuff for women in fandom. They were very nice to me too!)

Once we were permitted in, Juli and I walked over to the tea cups, took some pictures with Alice, (to go with our Cheshire Cat and White Rabbit ‘bounds) and then rode said tea cups, whileJuli took pictures. We were still waiting on Dom, because you know, he didn’t want to wake up at 5:30 AM (amateur!) which lead to a certain amount of just wandering and taking things in, although at 9, I had the meet and greet. 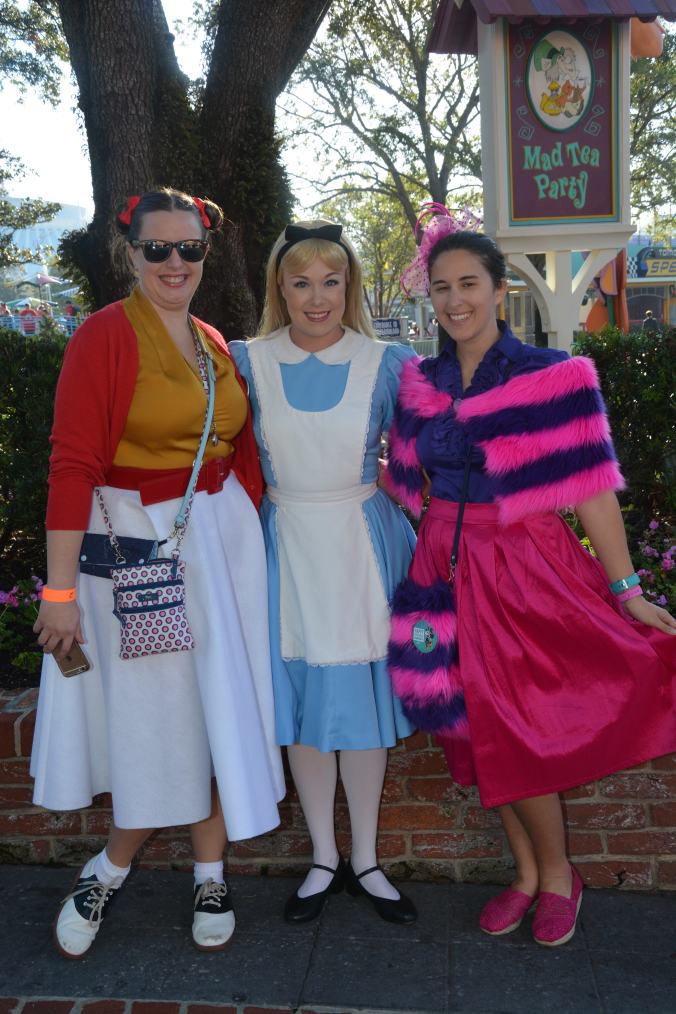 While I waited on line to meet the Ashleys, I thought a lot about this blog, fandom and what this all means to me. I was about a year into my commitment to doing the fangirl thing for real when I found Her Universe, and it really changed a lot for me. It was another two years before I opened my heart to the Star Wars extended universe stuff, which brought Ahsoka to me. (#AhsokaLives!) What meant the world to me, was that Ashley remembered me. Her work and designs have created such an incredible space for women in fandom, allowing us to express our love of media while still being girls, coming to it on our own terms, rather than those laid out for us.

After that, we all managed to meet up and started using our fastpasses, and just going on rides.

Also, taking lots of pictures. At 10:30 we came up with a GREAT IDEA to go over to Via Nappoli for lunch. (Hint, this wound up NOT being a great idea. We didn’t get there until Monday…there was a bunch of reservation drama too.) In the end, we wound up hitting a few rides, and then going over to The Wave at the Contemporary for lunch. After that, it was back over to the park, where we did a meet up with some folks for a photo op.

I mentioned this in April, but it bears repeating. I’ve really enjoyed Dapper Day and my general dive into Disney Park fandom this past year, but meet up wise, I’ve been underwhelmed, and my comic com experiences have spoiled me. NO ONE talks to each other outside of their groups at these meet ups, and it’s a huge ass bummer to me.

Post meet up, we rode the train, which I haven’t done since I was a kid, and then got some Dole Whips and headed to the enchanted Tiki Room. After exiting the Tiki Room, we got caught up in the Frontier Land Hoe-Down, which was amazing. Juli and I were pulled in to dance with Clarabelle and Horace, and neither of us could stop smiling for quite a while. We then road the River Boat (again, something I haven’t done since I was a kid. It’s way more fun having written over a hundred pages on Mark Twain!)

We then had a Peter Pan fast pass, and then picked up a Small World one. While on line for Small World, we discussed dinner plans and wound up deciding on going back to Pop and eating at the food court, which was kind of perfect. I had the fried chicken, and a giant ass Corona.

Juli and I both decided it was time to de-dapper, as we headed back to the park for the fireworks. We got an OK spot, and even made some friends as we waited.

Happily Ever After is a technological marvel, with a delightful soundtrack and a few really stellar sections. I’ll never love any framing quite as much as I love Wishes, nor will any likely make me as emotional, but it’s a truly terrific show. We’d already decided not to stay for closing, but I suggested we ride something rather than get stuck in the crush. We landed on reriding Pirates, which is always a favorite, although, as you can tell from the below picture, we were less than engaged. 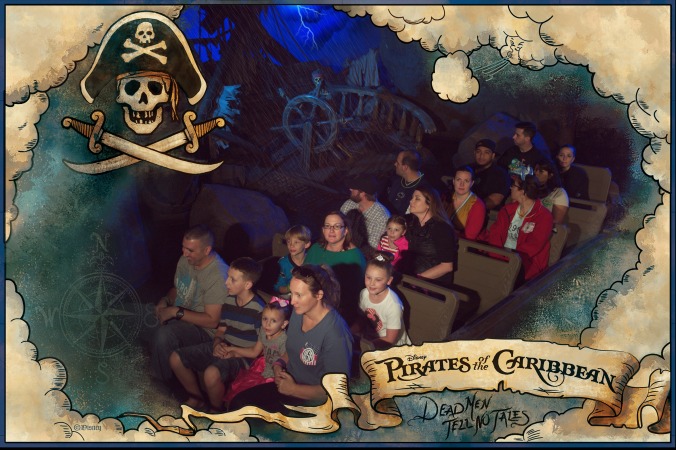 Juli isn’t yet literally asleep, though she assures me that she did at one point.

So then it was back to the resort and time for our longest sleep of the trip…and the next day…well, we’ll get to that!