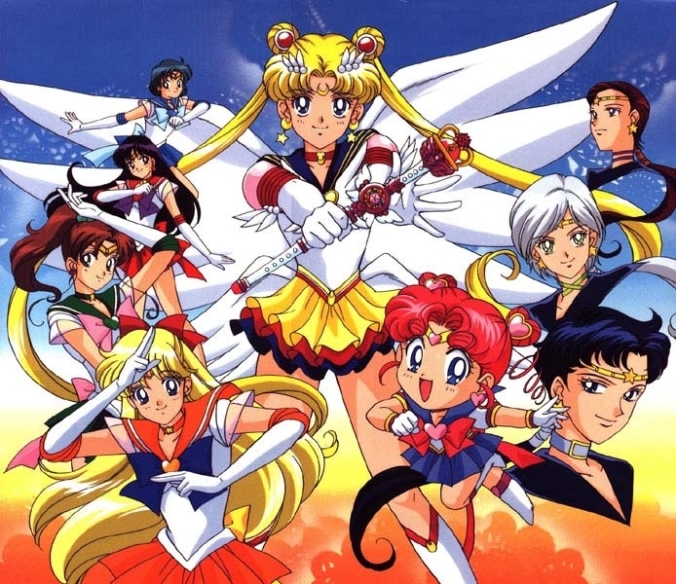 Our first episode has the whole Senshi/Star Gang off stalking a toddler, who’s been hanging out in the home of an old billionaire by herself.

OK, maybe I’m being overly critical but, that’s strange. I do love me some Chibi-Chibi though. I think this might be my favorite arc because of her and I mean, my queen Galaxia.

Anyway, this old guy has taken a (not creepy, I don’t think) liking to the little pink haired baby and has been giving her snacks, which she brings home. Usagi is convinced that she’s going to a Candy Kingdom, because Usagi is kind of an idiot. (But an adorable well meant one) So she follows her eventually she meets up with everyone else and they find Chibi-Chibi with the billionaire, who also has no idea who the Three Lights are, even though I think he’s sponsoring their next show or something? I don’t know.

Aluminum Siren and Iron Crow (Steel Crow, WTF is her name?) attack him and then Sailor Moon defeats his monster self.

This whole episode is mostly about the Senshi and Cats asking what the deal with Chibi-Chibi is, and the old guy perceiving that there’s a strong connection between her and Usagi.

Luna’s theory is that she’s Chibi-Usa’s daughter, which is, actually not a terrible guess. (It’s wrong but it’s OK.)

We do learn in our second episode of the week that Chibi-Chibi is a Sailor Guardian, but we’ll get there.

There’s a school sports meet and Seiya bullies Usagi into being on his softball team. (UGH, Seiya…) and his fan club is NOT INTO the idea. Namely his number 1 fan, an older girl from school, and a star softball player decides to make things tough for Usagi here.

Anway, Seiya and Usagi practice all night and she gets OK at softball. Meanwhile Galaxia threatens Aluminum Siren if she doesn’t find the Star Seed. The bad Senshi decide to go after the older girl.

Oh right, and Usagi and Seiya have a conversation about every person having a star in them and it’s actually very sweet but I still hate him.

Look the most important things about this episode is that we saw Sailor Chibi-Chibi Moon and she’s adorable and that Sailor Aluminum Siren realizes that Usagi’s probably the one with the Star Seed that she needs, because, obviously.

However, I don’t think she’ll do much with this knowledge since I’m pretty sure Galaxia is going to kill her next week.

And I really don’t like Seiya, he has no respect for Usagi’s boundaries, when she has said repeatedly that she has a boyfriend and isn’t interested in him. And all of her friends (except for Rei, who does not have her head up the Three Light’s collective asses) keep encouraging her to cheat on her wonderful boyfriend who also is the reincarnation of her soul mate, who she’s been waiting literally a millenia to be with again? Also, they have a future child together? Who they all kind of love?