Hey all! So, here it is, this week’s check in with Sailor Moon, and I’m really excited about it. (And now, I’m not just coasting on KP love from yesterday! 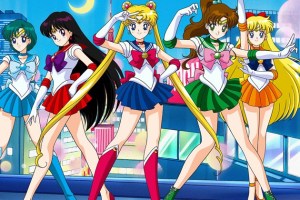 Nothing new to report. Although I am thinking of rereading Volume 3, due to remembering how great it is, and having some probably open reading time coming up, with Convergence hitting DC, we’ll see how it shakes out.

We’re into Sailor Moon S, and I really didn’t know what to expect but I was excited because I realized, that this is the stuff that I have vague memories of. My halfhearted attempt at watching Sailor Moon in the past was when I was in about fifth grade, so that would have been 1999-2000? Am I getting the timing right on when it was hitting Toonami then? Anyway, it’s got me psyched, plus the end of R was really satisfying. Last week we got a clip show which was, um, I watched it because of being a completest, but I really didn’t need to. But this week, as soon as the new opening, updated theme song and senshi chasing butterflies to the moon happened, I was like, “this is going to be great.”

And it was great you guys. The first episode, we see the Professor sending Daimons looking for something, and Rei is having apocalyptic visions, which A) is totally awesome and B) making her act a little loopy. The others are all stressed out because High School entrance exam? qualifying tests? Are coming up. (I dunno, I had to take a test to get into my high school and I totally wigged over it, so I get this. I get it in a big bad way.) Usagi is really freaked because she hasn’t been doing well on her practice tests and when Rei is sincere with her about how she has other things to offer besides being school smart, rather than teasing her (although there’s some teasing) Usagi knows something’s probably up. And something is, Rei is attacked, the girls save her, and two shadowy guardians jump out of trees, examine something that came out of Rei and nope away. (I know who they are, I’m no dummie!) Also the Legendary Silver Crystal stopped working.

THEN USAGI WENT AND PLAYED WITH SOME STRAY CATS and also got a power up but mostly OMG SO MANY KITTIES! Which were used to cheer her up because she was so deep into a funk that even Luna was like, “Usagi, go hang out with your boyfriend and don’t think about being Sailor Moon so much,” which means, it’s probably really bad. Also those shadowy guardians are back, and next week we meet Haruka. YAY!

I’m actually really loving seeing growth from Usagi. I love that she’s still silly and little bit of a mess, but she’s starting to get it together. (I’m also starting to see shades of how Bryan Lee O’Malley said she was one of the main inspirations for Scott Pilgrim)

Crystal also had a strong outing this week. With their friends all abducted and whatnot, Usagi and Minako are TOTALLY DONE with Chibi-Usa and Mamoru is maybe a little more forgiving but even he’s like, “guess we gotta learn the kid’s deal huh?” So they question her, but when she sees that they’re holding a piece of the Malefic black crystal she freaks the eff out and refuses to talk to them and then steals Usagi’s brooch. Usagi gets it back, and then Chibi-Usa is all, “Help me Sailor Moon Kenobi, you’re my only hope,” and next week we time travel, and that’s really the part of this arc that I like, so I’m excited for it.

2 thoughts on “Sailor Moon Check In: The “S” Stands for Super!”