There were about seven layers of awesome in Ms. Marvel #4. After being shot by Bruno’s brother Vick, Kamala find out that she can heal, and shape shifts  back into herself, revealing herself to Bruno. 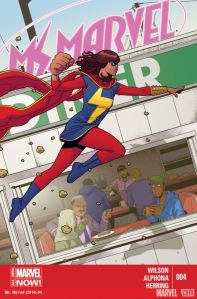 I think you can probably guess that I adored this scene. It was basically Kamala laying out her insecurities and Bruno telling her how awesome she is.

OMG! I loved it. I loved it so much. I wanted them to kiss, but it was absolutely in character that they didn’t. They also made her a quick mask to hide her face from the police, and what was probably my favorite part of the whole issue, Kamala has decided that she can be herself and still be Ms. Marvel. I was slightly disappointed that she needed to be convinced of this by Bruno. I’d rather she’d come to the realization on her own, but the moment is nice all the same.

So, Kamala decides that she’s going to go after Vick who is clearly in over his head, and we get our first mention of a Supervillain for Kamala, The Inventor. Don’t know who The Inventor is, but I’m looking forward to learning more about this person, who is manipulating young Garden Staters into committing crimes. Kamala decides to “break out the geek” and make her own costume, so that she’s no longer reliant on the Shape Shifting to hide her identity entirely, and this is where the “be yourself” theme becomes something pretty great.

At some point in her life, Kamala’s mother bought her a “burkini” which is a special kind of burka that can be worn as a bathing suit. I knew what it was from Reading Lolita In Tehran, and it was great to see another part of Kamala’s identity as a Muslim. Kamala converts the burkini into her new Ms. Marvel costume and goes after Vick. When she reaches the beat up house where he’s hanging out, it becomes clear quickly that she’s in over her head but she gets some great moments of showing off her powers and remembering to hide her identity. It’s fun.

I don’t think it’s surprising that “Identity” is the big, write a paper about it theme in this series. It’s generally the theme of superhero origin stories, and one that so prominently features a teenager from a minority, it was an absolute given. But the series has managed to do it well without feeling shoehorned or forced. As I said way back in issue one, Kamala herself is a really good and interesting character, and I’m into her world and story. But the exploration of identity is very clear in this issue, with Kamala realizing that now that she has these powers (so far shapeshifting and healing) she can be a hero on her own, she doesn’t have to hide behind Carol Danvers as pretty blonde with big boobs girl. (Several men make reference to Ms. Marvel’s chest in the issue, but they use the euphemism “powers,” it’s a cute joke, actually!)

It’s a nice little button. As usual the book is really funny, and the art is great and cartoony. I’m continually surprised by how much this book makes me laugh, but at it’s actual comedy, not at it’s complete absurdity. (You know, like how Amazing X-Men makes me laugh.)

Anyway, see you for write ups tomorrow and Sunday.