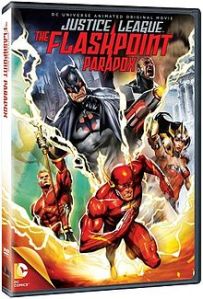 There are a hundred things that are deeply unsettling about the alternate universe that Doctor Zoom creates by to destroy The Flash in Justice League: The Flashpoint Paradox, and in the graphic novel it’s based on by Geoff Johns. Johns is a writer who just kind of gets it, so of course as it’s all deeply upsetting, it’s also incredibly compelling.

But let’s go through the unsettling first….

Iris West married and had children with someone other than Barry. This is sad, because they’re great, but it’s hardly like, devestating.

There is no Flash. In his place, Captain Cold became “Citizen Cold.”

Instead of Thomas and Martha Wayne being killed that night in crime Alley, Bruce was. The madness lead to Thomas becoming Batman, but much more violent and rough than Bruce and Martha became The Joker. It’s awful.

Wonder Woman and Aquaman have been waging a war against one another that leads to the destruction of Europe, after they had a love affair that went sour. (Also, Diana cut off Mera’s head. So there’s that…)

Diana brutally murders Steve Trevor, while he’s looking for Lois Lane. (Who he’s in love with. This just figures. Since Steve and Lois are basically the same person.) She also butchers Billy Batson.

Superman crash landed in Metropolis, not Kansas and spent his life as a lab experiment.

But there are also awesome consequences such as:

Cyborg puts together a team that consists of a bunch of really weird B-Listers, and “The Shazam Kids.” Everything about this concept makes me happy.

Aqualad and Lagoon Boy are fighting for Aquaman. This is only awesome if you watched Young Justice because seeing any of those characters is amazing.

The plot is outlined in these odd concepts, and mostly boils down to the war. There’s of course, a touching resolution in which Barry, returned to his regular timeline hands a letter that Thomas Wayne wrote to Bruce. Also, in comics, Flashpoint created The New 52, and the movie may have started a new universe too. (I haven’t watched Justice League: War yet, and obviously Son of Batman isn’t out yet.) So let’s just move on to voice cast.

Justin Chambers in The Flash in question. As the last thing I liked about Grey’s Anatomy before I finally gave up on watching it, I’ve always like Chambers. Really, the only thing wrong with his portrayal is that he isn’t Michael Rosenbaum or Neil Patrick Harris, I mean, we can hardly blame him for that, can we? My favorite casting in this is Sam Daly as Superman. It’s such a fun little nod to long time DC Animation fans. Nathan Fillion and Dana Delaney are back as Hal and Lois, and Kevin Conroy is Bruce Wayne/Batman because, unless necessary, there’s no reason to not have Kevin Conroy do the job. Kevin McKidd is the Thomas Wayne/Batman and his performance is so gruff and eerie that it’s shattering. C. Thomas Howell is Doctor Zoom and he’s menacing and great. Carey Elwes is Acquaman (nuff said), Vanessa Marshall turns in a great Wonder Woman. But this movie belongs in many ways to Michael B. Jordan as Cyborg. Victor Stone is one of my all time favorite characters, and Jordan is a remarkable actor.

The action is really brutal in this movie, and the gore is not skimped on, which I like and unsettles me. In the end I’m always going to love this movie and storyline, since it’s the one that made me fall in love with Barry Allen’s Flash in comics. Also, there’s a post credit scene, because I’m pretty sure DC Animation said, “Fuck it! We’re not waiting for the live action people to get their act together, we’ll just Marvel up this baby, since they made up scrap our awesome unified universe to make these GN adaptations. Long live the New DCAU!”

Up next is JLA Adventures: Lost in Time, which should be good.