When Katie and I talk musical theatre, we often use code words that we’ve derived out of our ten year long friendship and life long love of the genre. One of these phrases is “little couple.” The little couple is the secondary, and typically more interesting romantic couple in a Broadway musical. A classic “little couple” is Will Parker and Ado Annie from Oklahoma, a modern example would be Collins and Angel from Rent.

I finished up Buffy season 2 yesterday, and one of the observations that I had about it was that it was absolutely rife with little couples. Obviously the big couple is Buffy and Angel. Their story is epic throughout the entire series, but their season 2 arc is so unbearably tragic and angst ridden, it’s hard to move past.

And so we are relieved by the little couples, who create conflict and drama, but also make us laugh, and give us catchier songs. (OK, no one sings in Season 2, that’s saved until season 6.) 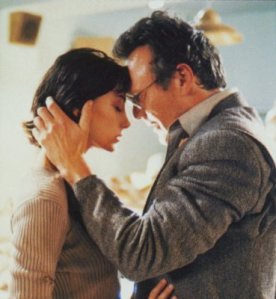 Now, of course, there’s not a lot of comic relief coming our way from Giles and Miss Calendar, they also get a tragic ending. But when they are together, it’s really something special. The back and forth between them, their awkward banter, his sadness when he learns that she’s actually a descendant of the gypsies that cursed Angel, and not warning them about the curse’s caveat, and the way Giles unravels after her murder are all unbelievably well crafted. 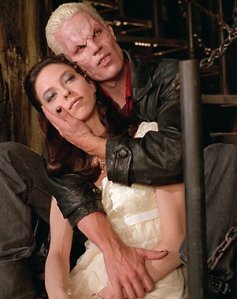 God, what is there to say about Spike and Dru? They’re funny, terrifying, and possibly the second best villainous couple in the history of television. 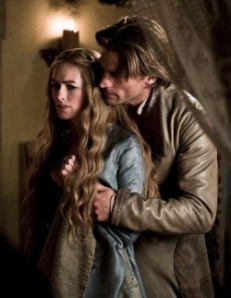 Number 1 With A Bullet

Of course in season 2 we don’t get a lot of their backstory, we don’t know that Drusilla pitied poor William, the terrible poet and turned him. We do know that they’ve been together for centuries and are dedicated to one another. Spike in particular, unique among vampires, truly loves Drusilla. When negotiating with Buffy for terms involving cornering Angel, Dru’s life is non negotiable, they both get out or no deal. That’s real love.

To me, this sums them up.

The early twinges of this relationship are so endearingly lovely. The way that Oz continually repeats, “Who is that girl?” every time he encounters her, the way he swears up and down that he’s crazy about her, but is willing to wait until she’s resolved her feelings for Xander.

Werewolves are notoriously patient. Oz and Jacob Black have taught me this.

The way she moves past Xander, and falls head over heals in love with him, this is all the good stuff about being a teenager in love. This good stuff is all embodied in Willow and Oz. 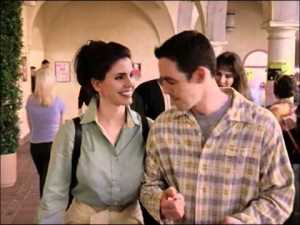 I repeat, Cordelia is the best!

Oh Xander and Cordy, the ups and downs, the fights, the making out in closets, the standing up to their friends, the proving their worth to each other and the group, they’re completely irresistible. I love bickering couples, and when it comes to the men I date, I prefer a sparring partner (verbal, not physical), so of course this relationship appeals to me. Also, I love the idea of the “social jump” when it comes to dating, and this is of course a symptom of Cordy’s maturity, which I mentioned before is one of my favorite elements of season 2. But it’s also a big jump forward for Xander, he moves past his crush on Buffy, his awkwardness with Willow and has a wonderful first love with Cordelia. That’s really what it is, it’s first love. It isn’t epic, it isn’t earth shaking, it’s little. But it makes all of the difference.