OK, so after giving it some thought, I’m managing to piece together coherence about The Dark Knight Rises.

Because for about 2 hours after the movie ended, I had 3 thoughts.

1. Christopher Nolan was able to create a non supernatural version of a Lazarus Pit, and that’s amazing.

2. Christopher Nolan set himself (or someone else) up to make a Nightwing movie, and this is also amazing. 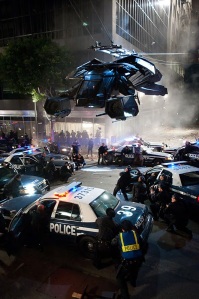 Now that I’ve had time to process and put my thoughts together, I have a few more.

From the very beginning Christopher Nolan created a different kind of Batman than anyone had ever seen before. He was free of camp, and free of the necessary trappings of a traditional comic book universe (in which there must also be a Superman, a Flash, etc.), and he was definitely going to be taken seriously.

And this was something, that while I loved and applauded the films, bothered me a little. On my old blog, while reviewing Captain America, I pointed out that a lot of the fun of a comic book story got lost in the Nolan films.

Turns out he was saving all the fun for part 3. And fun it was. But it managed to be fun without distinctly losing the dark, serious tone of the other 2 movies.

Let’s start with the villain choices. A lot of people didn’t expect Bane to come within 10 feet of these movies. I was one of them, mostly because in the “realistic” universe that Nolan created, Bane was an impractical and largely impossible villain to use. Because the whole point of Bane is that he breaks Batman’s back, and then Batman is healed in a Lazarus pit, which was, I thought, impossible to pull off. I am clearly not as awesome as Christopher Nolan.

I did expect Talia Al Ghoul, and I was thrilled at her inclusion. Talia is an enigmatic figure in the Bat-mythos. She, like Selina Kyle (more on Selina later!), is less of a straight up villain and more of a foil for Bruce. However, Nolan made her a straight villain, which was so incredibly perfect. In this universe, because Ra’s Al Ghoul can’t be immortal, even at her most ambiguous, Talia would want to avenge him. And I can be proud that I guessed her identity fairly early on. Once Bruce stated, “I assumed your family was wealthy,” and she responded, “not always,” I actually gasped, “Talia!” My friend Emili looked at me strangely, because the casual Batman fan is not aware of who Talia is.

Then there was Catwoman, who was played perfectly by Anne Hathaway. She retained her ambiguity. Initially, it was her catburglary that piqued Bruce’s interest (and got him back in to the Batcave, after 8 years of retirement), but she quickly becomes an ally, when she realizes how much the world needs Batman. And then they runaway together, because Christopher Nolan is awesome.

Also, there was a small role played by Scarecrow, and Cillian Murphy became the first Batman villain to ever make it through an entire series…except maybe Mark Hamill…

Anyway, on to Batman’s friends. Although their roles were minimized this time around, Michael Caine and Morgan Freeman were spot on (as usual) as Alfred Pennyworth and Lucius Fox. Caine in particular gave a banner performance, that included something I didn’t ever expect to see in a mainstream Batman story, Alfred abandoning Bruce, when he decides to become Batman again. Lucius on the other hand, is ready for this return and provides him with a GODDAMNED FLYING BATMOBILE! I cannot stress enough how awesome this is.

Jim Gordon has assumed his mantle as Commissioner by this point, although we’re told within twenty minutes of the start time, that he’s about to be pushed in to retirement, stating simply “He’s a war hero, and it’s peacetime.” I spent a lot of time missing my beloved New York during this movie, and none more when Gordon and the older cops talked about how much the city had changed. Gordon is a pre Giuliani era New Yorker. And this is Gotham after Disney bought Times Square. I don’t remember the city much then (and even what I do remember is still the cusp of everything being gentrified), but I remember not being allowed near it, except in very specific ways, with my parents, when we were parked in a 1 black radius of where we were ending up. This also may have been because I was a child, but I often wonder. Gary Oldman plays him as a man broken by his secret, and plans on his retirement to reveal it.

New to the team is John Blake, a young beat cop, raised in an orphanage who guessed Batman’s identity as a child. Which of course, makes him exactly who I thought he was. Kind of. Because when he introduced himself as “Office Blake” I thought I misheard and he said “Drake.” Which would have made him Tim Drake, the 3rd Robin. But he wasn’t, but he was still Robin. As it turns out, John is his middle name, Robin is his first. In the end, he finds the Batcave, and is staring up, ready to take on the mantle…I don’t think he will be Batman, to be honest. I think he’s going to be Nightwing, the persona that Dick Grayson took on as an adult. And I think that that would be amazing.

Finally, there’s Bruce himself. I owe Mr. Bale a BIG apology. He was incredible. The events of The Dark Knight left Bruce broken, physically and mentally. He gave up Batman, and began living as a shut in. The film opens with a fundraiser at Wayne Manor, where we learn this information. Also this is where Bruce meets Selina, as she breaks in to his safe (disguised as a maid) and steals a set of his mother’s pearls, and dusts for his finger prints. He figures out what she’s doing within seconds of seeing her, (because he’s Batman!) and decides to stalk her to figure out why she needed his finger prints. Alfred does not approve, and wants Bruce to get back to running Wayne Enterprises and go on a date with Miranda Tate (which is stupid, because she’s actually Talia…but Alfred couldn’t know that). Instead, Bane shows up, Bruce decides he needs to fight him, and gets his back broken and sent to “The Pit” (which again, people who know Batman know that it’s The Lazarus Pit). While down there, Bruce watches as Bane causes his city to burn, and finds his drive to be Batman again. He rises (Get it? That’s the title). Then he comes back and kicks ALL KINDS OF ASS.

There were several small roles that made me happy. Aside from Murphy coming back as Jonathan Crane/The Scarecrow, there was Burn Gorman (Owen Harper from Torchwood) as a League of Shadows spy in Gotham, Daniel Sanjata (Franco from Rescue Me) as a Captain who sneaks in to Gotham to free it from Bane, and Will Estes (JJ Pryor from American Dreams, and Jamie Reagan from Blue Bloods) as um, well, a rookie cop who spots Batman during a car chase…this is not really a stretch for Estes, who plays wide eyed guys who notice things a lot. (Except for that time he played Lucy Camden’s boyfriend who got a french girl pregnant, or something…)

The plot centered around Bane and Talia stealing a nuclear reactor that they turn in to a bomb saying that “one Gothamite has the trigger” (that Gothamite is Talia) and create an upside down order, pulling the mighty from their pedestals. What they don’t share with the class is that the bomb will go off in 5 months, regardless of the trigger. So for five months, Gotham becomes a post apocalyptic wasteland, because they blew up the bridges and blocked the tunnels. And all this time, Bruce is trapped in a pit, with a broken back. Meanwhile, Jim Gordon and John Blake are funneling in supplies, trying to free the cops who are trapped in the subway system, and drawing chalk Batsymbols all over everything. If this sounds stupid, it isn’t, it’s awesome! Also, it reminds me of Son of a Witch, Gregory Maguire’s sequel to Wicked, when an underground revolutionary group scrawled “Elphaba Lives” graffiti all over the Emerald City, which made me happy because when I think about Gregory Maguire’s awesome Oz series I get all tingly.

Bruce returns, and rallies Blake, the cops, and Selina to open the tunnels and fights hard for Gotham. Then he tows the bomb with his Goddamn Flying Batmobile, and takes it out to sea. But not before revealing his identity to Gordon, and making out with Selina for a bit.

Then they bury Bruce in an empty grave, Blake turns Wayne Manor into an orphanage and sets himself up to become Nightwing. And then Alfred goes to Florence…but I don’t have time to get in to that.

My cousin Jake put it in a succinct way, that I totally agree with, “It was like Return of The Jedi, some people are going to like it better than the second one, but either way it served the trilogy.”

2 thoughts on “Anyone Can Be Batman”